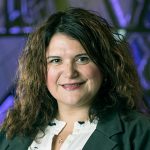 By Velia Soto, Senior Director of Curriculum and Assessment

Soy la orgullosa hija de inmigrantes Mexicanos, and I am a proud American. My parents came to the United States to widen the door of opportunity for me and my three siblings before we ever existed. They believed in the American Dream—education, a good job, and sustainable income—and wanted that dream for all their children and grandchildren. In the small hometown in northern Mexico that they loved, they saw limited opportunities and barriers to achieving generational wealth and success. In America, they knew we would have access to opportunities, and they instilled in us that education was the key to our future.

My father came to America as a U.S. resident in the 1960s, and as part of applying for his residency, he signed on to be a part of the Selective Services. He was drafted into the U.S. Army and deployed to Germany during the Cuban Missile Crisis, even though he was still learning English and was not a U.S. citizen. He married my mother, and upon his return to the U.S., they migrated further north to where work opportunities were plentiful in the steel mills of the midwest and my dad would become a welder. Their formal education stopped at elementary school, but their work ethic ensured our future. My father worked two jobs and sometimes 16-hour days so that my mother could work from our home and stay with the children. We were on our way.

My parents wanted the American Dream, but also wanted to ensure that our Mexican roots were not lost in the pursuit. They saved enough money so we could spend our summers in Mexico. My father would drive the family down each summer and return home to work. At the end of the summer when he would come to pick us up, we were filled with language, family, friends, and food — ¡que rico!

“…My parents were always raising the bar to learn more. This experience pushed me to have a deeper understanding of the important role that language played in my life and in my heritage.”

Language is an important part of my biculturalism. We spoke Spanish in the house and took formal Spanish in high school. That was a challenge. The speaking had come so naturally, but my parents were always raising the bar to learn more. This experience pushed me to have a deeper understanding of the important role that language played in my life and in my heritage. My parents’ experience had been limited because of language barriers, and the challenge to learn formal Spanish gave me insight into their struggle. Language was a key to access and because of the value my parents put on language acquisition, we sometimes hosted cousins from Mexico to stay with us to learn English. They lived with us, and would sometimes even go to the same school as us, and this would help to keep us grounded in our Mexican roots during transformative years in our lives. I often felt Mexican at home and American in school; a duality that would follow me through my adulthood.

Ensuring my Mexican roots were deeply embedded in my dual identity came at the price of making many sacrifices.

Every sacrifice mis padres made was to ensure my siblings and I went to college. It was the expectation. There was nothing that my parents explicitly said to me to remind me of this, but it was in their actions, and it was always a feeling. Their high expectations and low tolerance for disappointment was felt. This gave me a feeling of urgency toward making their dream come true; for them and for me. And with my mother’s constant support and presence at home and my father’s ability to always find work, their dream was now my dream.

My parents’ journey and sacrifices inspired me to be an educator. It wouldn’t be until college that I would have a teacher who could relate to the experience of being bicultural. I believe it would have helped me to have had teachers who look like me and sound like me earlier in my education and I wanted to be that for others to help propel them into bigger experiences. I wanted to instill in others the belief that higher education was possible and that obtaining it would be a way of building generational cycles of wealth.

While teaching and leading in predominantly Latino communities, I saw people who had very different immigration experiences than my family. We were fortunate that my parents were authorized and that my siblings and I were born in the U.S. We were born in a time when immigration policy wasn’t as contentious as it is now. When working with families as a principal, I saw fear of being caught without papers and being deported. Also, the fear that one mistake would derail their child from ever achieving their hopes and dreams. As a result of my own experiences, I believed in building deep relationships with parents. What I tried to help my families understand is that life in the U.S. is different and there is a battle going on in a child-of-an-immigrant’s life due to having both the expectations of our ethnic group and yet also being an American. Being first-generation American can be challenging for kids as they are coming into themselves as a teenager and just starting to understand their identity.

There are still many barriers that Latino kids must face to be successful in the world; one of which is telling them they don’t belong here and that they are only contributing in negative ways. They internalize this and then believe this about themselves. But I believe it’s up to people like me to demonstrate the many ways that Latinos do contribute in positive ways.

“My mom would say, ‘Hay que salir adelante.’ You must keep advancing, moving forward in the direction of what you want. You must overcome and not let the barriers get in the way.”

While I never considered myself a role model, I see that being fortunate to be in places and spaces where I have a voice, affords me the ability to represent my community. I tried to convey to my families that my parents came from the same means and if I can do it, they can too. There will be bumps in the road, but you can get through them. My mom would say, “Hay que salir adelante.” You must keep advancing, moving forward in the direction of what you want. You must overcome and not let the obstacles get in the way. If the families I serviced hadn’t had a teacher or principal that could speak their language or offer resources, they may have stayed silenced.

During Latino Heritage Month, I want to give voice to the core issues facing my community that keep me up at night. The future of Latinos in America lies in acceptance. There is an overwhelming negative response and an underwhelming acknowledgement of contributions we make to society; sometimes, it’s basic things such as how food gets to your table—from the farmland, to transportation, to getting it set up in the grocery store and then rung up and put in your car; other times, it could even be serving in the U.S. military despite not even being a citizen.

During COVID shutdowns, immigrant essential workers did not get the acknowledgement they deserved. They sacrificed their lives despite the warnings and known dangers of the virus, yet they seemed to have been ignored, negatively treated, or erased from the story. As Latinos, we believe strongly in taking care of our families and communities. Latinos played a big role in keeping communities alive and thriving during a tumultuous time in our country and we deserve to be recognized as those contributors and be seen as valuable for those contributions.

The statistics remain low for Latinas graduating college and getting advanced degrees. I think that until Latinos can see themselves in other positions such as doctors, lawyers, or engineers and that is the norm, our community will not be acknowledged as positive members of society. That is at the heart of the issue. Latinos want to be seen. Through our bicultural identities, we contribute significantly to this country.

What do I say to those who don’t believe they can do something because no one has done it? I say, pave your own way. If you don’t see it, make it happen. I never had any Latino teachers in elementary school, and I wish that I had. I wish that someone could have understood my culture and how it impacted my identity. But that didn’t stop me from making my own way. If you don’t see yourself there, put yourself there. You are paving the way for others. They will follow and see that they too can do something they have never seen and achieve El Sueño Americano.