T.S. Hoard (Ryan Fellow Class of 2015) is in his second year as Principal at Excellence Boys Middle Academy in Brooklyn, New York. His students have exceeded the local district benchmark in ELA/Math Proficiency by 230% through diligence and a focused approach. But perhaps the biggest factor fueling their success is the aspirational environment Mr. Hoard has ingrained in the school’s everyday activities.

Having a clear objective, however, doesn’t guarantee immediate results; T.S. knew there was a lot of work to be done to achieve the vision he had in mind.

The first thing to do was to establish the school’s Five Creed Values. These would become the foundation for the purpose and direction of Excellence Boys.

As these Values became entrenched in the culture of the school, T.S. established Morning Huddles where his team could begin the process of strengthening the aspirational environment.

By having the Morning Huddle in place by grade span for the 2016-2017 school year, T.S. was able to create a stronger sense of community among students and staff.

“We have a creed value ‘focus of the month’ and all of our huddles for that month are aligned to that core value. For example, during the month of February, our core value focus has been Ubuntu, as we focus on learning about the ‘hidden figures’ in Black History that paved the way for us as we stand on their legacy.”

One of his key results for the 2016-2017 school year: “Through our Morning Huddle, at least 85% of scholars will be eligible for the quarterly field trips and end-of-year trips as evidenced by the quarterly paycheck passport points tracker.”

This paycheck system at Excellence is used to set quarterly and end-of-year benchmark goals for students to be eligible to attend these trips. Each week, T.S. will reinforce these goals during Morning Huddle.

“As a way to enrich the sense of community amongst the boys, I reinstated Morning Huddle in a way that our staff could win on these goals by holding them by grade level on separate days instead of whole school. Holding community meetings by grade level enables the assembly to meet the academic and cultural needs and strengths of each grade.” 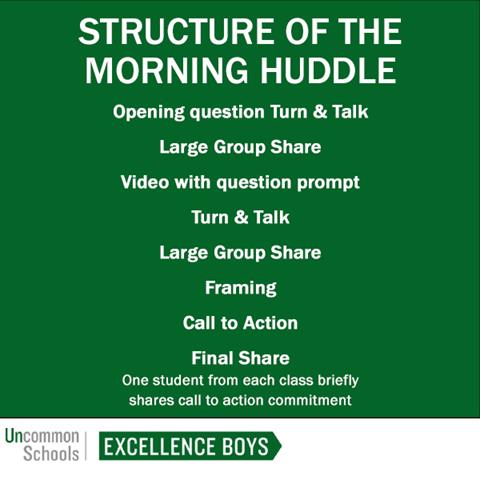 I constantly have students coming up to me and saying, ‘What is our focus going to be next week?’ or ‘Mr. Hoard, can I talk to you more about what we discussed in morning huddle?’

“For example,” T.S. continues, “I created a weekly schedule where I selected one grade a day and prioritized assigning the grade level with the more challenging management earlier in the week such that the grade would have a chance to receive a challenge/culture-related goal and work towards the finite goal by the end of the week.”

What do T.S.’s students think of these meetings? “I constantly have students coming up to me and saying, ‘What is our focus going to be next week?’ or ‘Mr. Hoard, can I talk to you more about what we discussed in morning huddle?’

When I hear students utilize habits of discussion by building on each other’s thoughts and using evidence from previous morning huddle discussion topics for their class…I’m blown away by how much they are able to retain week to week.”

As for the teaching staff, T.S. says they spread the message of what he delivers throughout the week with their own “homeroom huddle”  (on days when their grade level is not a Morning Huddle, for instance). T.S. adds, “This simply means I send the topics of the week to our teachers in advance, and the two homeroom teachers reinforce the creed value and topics within their homeroom in a similar fashion.”

Without question, T.S. would not see the levels of success he has without a significant amount of planning and foresight. To make sure he’s focused on the right things, T.S. maps out a scope and sequence that he follows for the year.

“First, I align each month on a rotation to each Creed Value,” he begins. “Since we have 10 months of school and five Creed Values, each one is addressed twice. Next, I think about if there are any special celebrations, events, or traditions for the month.”

He also researches current events that affect the boys and how topical subjects can push their thinking: “In September, we had a rich discussion and watched a brief video on Colin Kaepernick’s silent protest…(the students) pushed each other to answer if we agreed with the protest or not and if he was meeting his goal. During these huddles, I rarely state my own beliefs because I want to push my students’ thinking by helping them shape their own worldview by presenting arguments and counterarguments so they can make claims based on the evidence. If anything, I play ‘devil’s advocate’ and push them to elaborate or use better evidence.”

In just his second year as principal at Excellence, T.S. has seen dramatic change and knows this is just the beginning. His work is far from done, but he’s confident that using the Aspirational Environment objective is an important factor in making Excellence the success it is today and beyond.

“I am proud our expectations and behavior management systems support high levels of academic productivity and that we have a staff that is bought into the mission and vision of the school. Student culture has grown leaps and bounds due to all of us working towards our common goals.”

T.S. uses PowerPoint presentations with his students to reinforce his Five Creed Values and encourages discussion around them. You can download a sample of one of his recent presentations here.

T.S. Hoard is completing his third year as a Ryan Fellow, leading Excellence Boys Middle Academy in Brooklyn, NY, a member of the Uncommon Network of charter schools.