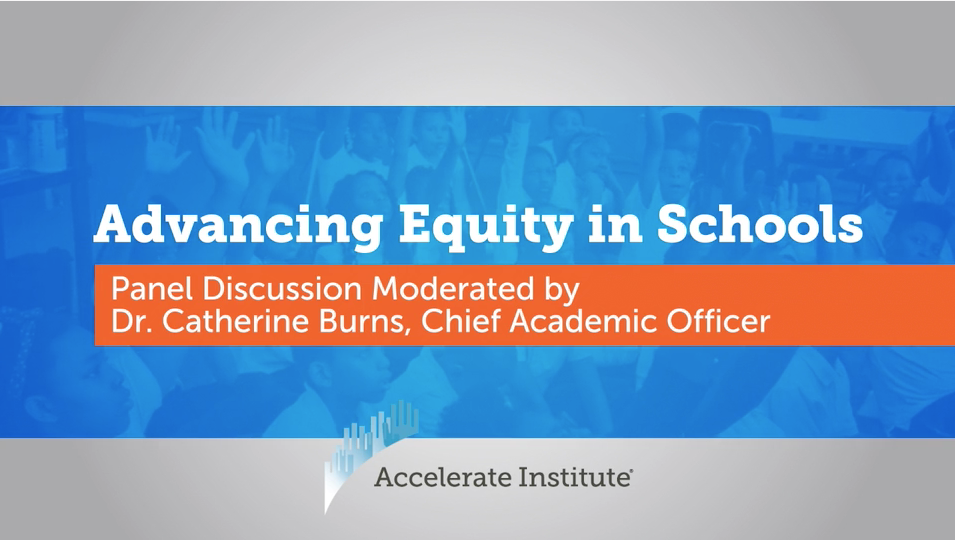 All three school leaders contributed to Accelerate Institute’s latest report, “Advancing Equity in Schools: From Replicating Inequities to Eliminating Them.” The report details how 18 educators from around the country are tearing down systems and changing adult mindsets in their school buildings to elevate student achievement.

Álvarez—a winner of the 2019 Ryan Award—said when it comes to his leadership style, it’s all about strong relationships and empathy. After setting the goal that 100% of students would attend a four-year college during his tenure as principal of IDEA McAllen College Prep, Álvarez made sure every single staff member was bought into the notion of wholeheartedly supporting students.

He explained, “We say [to students], ‘Hey, we can do it; we’re here to help you.’ From the custodian to the bus driver to the cafeteria lady to the teacher to the assistant principal to myself and even my colleagues at headquarters: we work together. We see everything we can do, for every student.”

Hernandez, who was faced with the arduous task of launching her school during the pandemic, echoed Álvarez’s sentiment. For her, she said the most important aspect of transformational leadership is ensuring that all staff feel a shared responsibility for student success and understand and are committed to meeting expectations.

Once data revealed many first- and second-graders were significantly behind grade-level for reading, Hernandez’s thematic goal at Navigator-Watsonville Prep became clear: in order for students to excel in high school, college and beyond, catching up to grade-level was a must.

To that end, Hernandez implemented five clearly-defined steps to ensure staff was committed to meeting their goal. “Through this, I think we were able to build a really strong sense of shared ownership, which really led to a huge difference in student outcomes based on our data that we have so far,” she said.

Jamison-Dunn spoke to the tumultuous social unrest over the summer of 2020 and how—amid the pain that students and family members were experiencing firsthand—she was able to leverage these hardships to strengthen school culture. In response to the events, she established a Social Justice Committee for team members and facilitated difficult but important conversations among students and parents.

“We could not ignore what was happening, because it was happening in our communities,” she explained. “To witness that firsthand… you can’t just come to school and say ‘let’s learn reading’ when we are mourning, and we are damaged and we are bleeding.”

Watch the full, hour-long replay below to learn more about how these inspiring school leaders are delivering educational equity for low-income and minority students—including preparing for a return to in-person instruction in the near future.