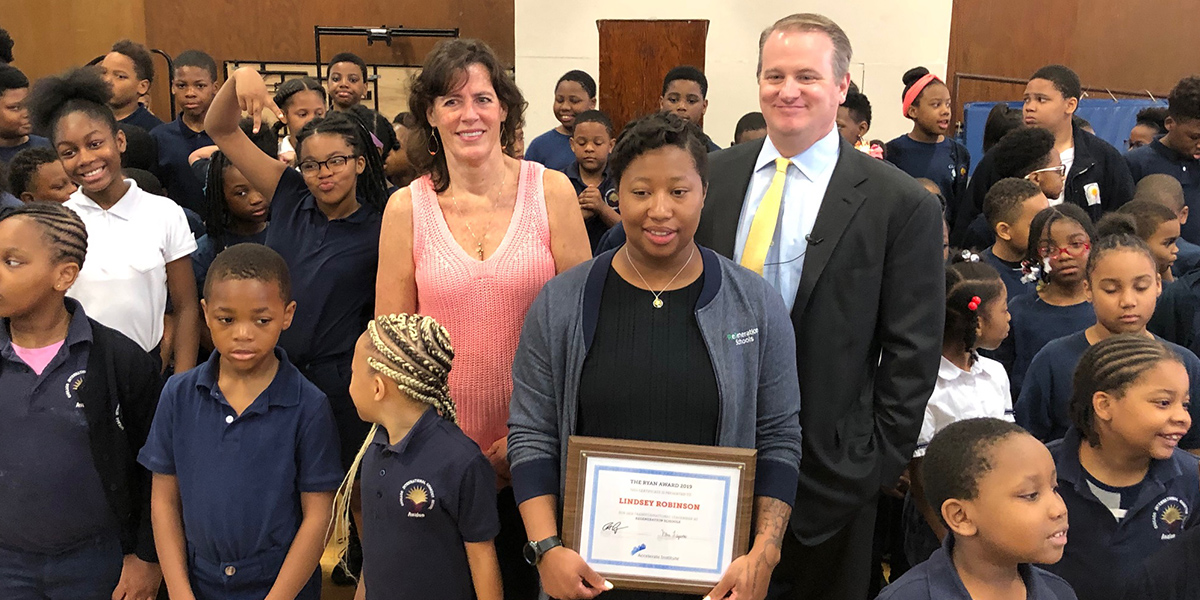 Accelerate Institute is pleased to announce the winners of the 2019 Ryan Award—the national award that honors transformational principals closing the achievement gap in urban education.

Accelerate organized a special surprise ceremony last month to honor Lindsey Robinson with the award for her outstanding achievements as elementary principal at Chicago International Charter School Avalon in Chicago’s Avalon Park neighborhood. The Ryan Award comes with a $25,000 honorarium.

We created the Ryan Award seven years ago to recognize transformational school leaders, and that’s exactly who Lindsey Robinson is,” Accelerate Institute Founder Pat Ryan Jr. said. “She is singularly focused on her students and making sure they have every educational opportunity they deserve.

Lindsey is the first-ever Accelerate Institute Ryan Fellow to win the prestigious Ryan Award. Having since moved on to serving as K-4 principal of Chicago International Charter School Basil in Chicago’s Back of the Yards neighborhood, she came on as CICS Avalon elementary principal in 2014 after completing her fellowship.

Growing up about a mile from CICS Avalon in the city’s Chatham neighborhood herself, Lindsey has described having her own personal struggles with the challenges her students face as children of a low-income community.

At the end of the day my goal is to make sure that students that grew up like me [have] a chance to be successful,” she explained in an Accelerate Institute documentary. “When you think about my life path, I should not have been here.

Lindsey joins Joán Alvarez, principal of IDEA McAllen College Prep, as a 2019 Ryan Award winner. Accelerate Institute presented Joán with the award during a special surprise ceremony in May in which he was met by his students and family.

Joán was identified as a candidate for the 2019 Ryan Award during Accelerate Institute’s national search after closing the achievement gap at his school.

During the 2014-2015 school year, 52 percent of IDEA McAllen College Prep students met or exceeded state standards for math and reading exams. By the 2017-2018 school year, that number leaped to 73 percent. 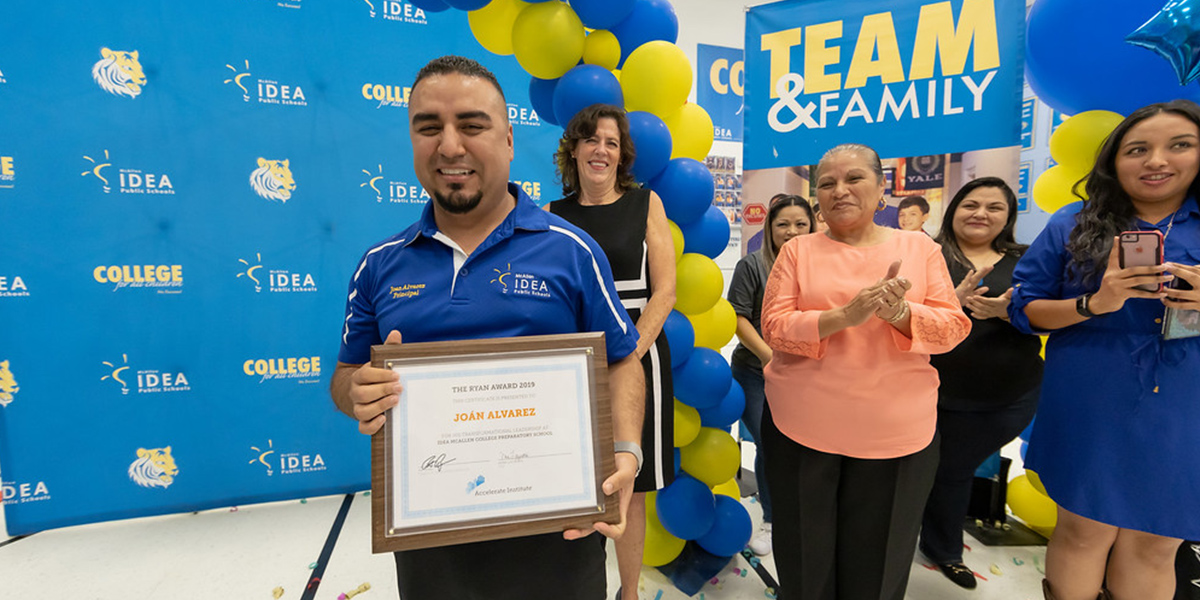 Joán Alvarez has built a school culture that embraces constant growth, for his teachers, himself and his students,” said Pat Ryan Jr. “With this award, we want to amplify the story of leaders like Joán so other principals learn how to build schools with healthy foundations that enable their students to compete with their peers no matter where they go.

Upon winning the 2019 Ryan Award, Joán told local news, “This award speaks highly of the hard work that our students are doing to fulfill our promise of 100 percent to and through college, and all the hard work that we’re doing—it’s a team and family commitment here at our school.”

In a true show of his dedication to his students’ success, Joán—a first-generation college graduate—has pledged his entire $25,000 honorarium toward graduating seniors’ college tuition.

Both Joán and Lindsey will be honored at the annual Accelerate Institute Impact Dinner in Chicago this fall.

Learn more about the Ryan Award.